It’s been eons I know since the last update, but things have been really tough over here to manage since I cut ties from several business individuals. I had no choice in it really because when you are hit by signs of instabilities and folks want to hold you back because they have their own opinions on the matter, you simply just have to realize the conflict of direction & interests won’t help progress the issue at hand. This happened in the summer, and then I was extremely emotional about it and very tired of people just either riding me like a fool or just tagging along without anything essential to add to get stuff done. That last part is for those who want to make games, but don’t have any skill to contribute, I suggest just either go to school to get professional instructions on how, or find it within yourselves to teach oneself on the subject.

One thing to add is that I’m not a babysitter and I still felt I was alone anyways with folks trying to sway me away from the main focus. My first creative partner I had on the project I have to express is a god when it comes to composing music and design. Sadly with him, life just could not cut him a break and misunderstandings lead us to shatter ties.

Different adverse perspectives had teared us apart and my patience completely exhausted on waiting on him. In comparison to the Unreal game jam team I had worked with, creating a playable game in under 7 days, compare that to waiting for someone that lead me on with promises that lasted over 3 years – this is why I had to make the choice to walk away. I get furious every time I think about it because the potential was there! But I see now it wasn’t meant to be and I shouldn’t have pushed or suggested for him to tag with me on the project. Now our friendship has been decimated because of this, and on that note, I still feel really devastated about it.

Anyway can’t let that hold me back as that was 4 months ago.

So currently I’ve been  hacking along, pushing my limits in this project. We are now at 5 years of development in November. The first 3 years was finalized in the prototype that you can play here on the site, and the remake to be made in the next year, I hope. From what had happen in 2013, when my father suffered a double stroke and survived, I had to stop developing the game and focus on family things. Creatively I was still active, but I felt at a lost with my developments alone because largely I wanted my dad to play it too. Since my creative partner didn’t know programming not even did he do any graphic assets that was used in the game, I felt only his marketing guidance would help. He also suffered major injuries in a vehicle accident, so many things were radically out of control in his life to focus on anything else.

Later did I know that he wasn’t really motivated to even work on DARK ZETA since it wasn’t his style. What killed me was his advice to abandon anything “personal”, code word for giving up on DARK ZETA, or anything creative that doesn’t match demographically as a belief,  at least for public consumption. This is where the rift happen to appear. He really didn’t care for it and just wanted to make money by catering to what he believed to be the demographic he was so accustomed to experiencing. He called them “hardcore gamers”, but I disagree. Even though there is a number of specifics, not all hardcore players are created equal. Not all gamers are alike either, but what he saw in his neighborhood, in reflection, only affirmed to his beliefs. This realization then had caused me to reflect. This infuriated me and at the same time I felt like not wanting to live anymore because i value his opinion in high esteem.

I worked so long in this project and promised to finish it. I get people in my way to disrupt my progress with their own ideals and beliefs. I respect them, but when they state it as fact and I start to feel their reasons like my own, I start wanting to quit. That’s why I can’t be around them but wish I could delete the past 3 years so I can have back that friendship with him, because we had a good run of good times. This makes me want to quit the project, but I have to finish it – it is a promise I don’t want to break.  It is a thing I have to prove myself beyond anything else. My ultimate personal accomplishment. I did say I quit, but for a day I did he he. The next day I started back once more. It is a tug-o-war and there are days I want to quit, but I never stop. That is centrally normal with anyone struggling. When you are burned out, just chill out and get your stamina back. Nobody has sex for 24 hours and not break in between. The same with work, you just move in a rhythm and break. Burnout will happen but also the spirit will never stop once it has committed. It becomes routine as time goes on. It is hard, like anything else in life when you first deal with it, but it gets easier, or at least tolerable. Discipline doesn’t have feelings, and eventually one grows into it and make it routine. At the core, you have the belief that it will happen with hard work and passionate focus. Love what you do, and do it with purpose. 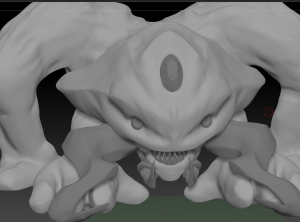 Alright! So with that said, time to divulge my plans:

Since I’m doing this alone, the process will take me 5 months time as I’m also creating concept art for visual communication and descriptions content for Kickstarter. I default on Kickstarter because is a popular crowdfunding site, but I might find alternatives that are more focused on the subject matter.

Overall in the end this game is much more than a game. Is a story that goes beyond it’s own world and keeping it in a game world doesn’t give it justice, that’s why I decided to make an animation series on youtube first, then game as a secondary compliment for folks who want to control the hero. How come? Numbers. There are a larger mass of viewers compare to games format. I think of games as modern literature interactive book, but many in this era are still stuck thinking games as toys. Yeah is cool to have fun, get in on the stimulation simulation, but I believe is more than that. That’s why in the game you’ll have a lot of cool in-depth elements that you won’t be possible from the animation.

The next question is, how in the fuck am i even able to make this happen alone?

Well I get as far as the experience you get in the high concept prototype demo that’s posted here on the site. I caution you that demo design was to make it as hard as a NES game, and that’s why your chances for survival are small. Sadly now we have a young demographic that will get really frustrated and cry about the game’s difficulty. There are things I actually worked on to make it better, but I hit the limits of the tool I was using to make the demo. Thus I moved my project to Unity now since they do 3D and also export to HTML5 as well. Game Maker Studio is top notch but now the story complicates the presentation of the game overall from using that tool. The game will morph gameplay, in real-time, from 2D to 3D. I already made it possible and posted many tweets about it online. It looks 2D but is truly being drawn in 3D with a post filter. With the story evolving, the game will become Fully 3D but still play in 2.5D with 3D assets, as everything already is when you get that far in the story.

So here it is! Nothing too extravagant. Worked on Title Menu, Added Jump, and linked it#gamedev #screenshotsaturday pic.twitter.com/6E7ytzeBsV

Is funny because even though I described it as so, people still don’t get it nor programmers 🙂 . Everyone says is hard, but I already proved them wrong lol is largely like Evoland, but without the sprites. Is actually more of a hybrid mix of Paper Mario and Link between worlds with post processing low rez filter. I largely already have the RPG engine working, is all about asset creation and audio. The game can be literally made in less than 3 months if I had a second person helping me with assets and music, but I’m alone thus it will take an undefined time to accomplish.

So that’s the gist of it. Now I return back and work diligently on the project and also find financial solutions to help with this.